On Saturday, 22nd December 1866, the body of a young woman aged 18 years was recovered from a lodge adjacement to Holden Wood cotton mill, that was owned by Mr. James Maxwell and situated in a place known as Holden Wood, near Haslingden.

At around half-past one in the afternoon, John Holgate, a spinner employed at Maxwell’s mill, whilst passing by his place of work, had noticed something bobbing about just above the water level in a lodge that was within yards of the mill. Upon making his way over to the waters edge, it was then he saw the head of a young girl which was just above the water, with the remainder of her body submerged.

Already knowing the depth of the water in the lodge was quite deep, reportedly around nine feet, he knew that trying to recover the body himself was an almost impossible task, so Holgate left to fetch for another worker, who in turn went off to search for a policeman.

By the time a police officer had arrived, water from the nearby Holden Wood reservoir had been slowly filling the lodge, which in turn was by now submerging the victims head.

And yet despite a struggle, all three men succeeded in retrieving the body.

The inquest on the finding and identity of the body was held within the public house of Mr. Lawrence Barnes, at the Holden Arms Hotel, in an area known as the ‘three lane-ends’ junction, with the deputy, Mr. Dean from Blackburn residing over the proceedings. 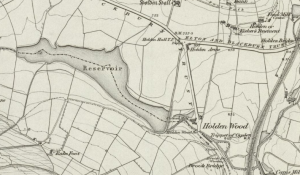 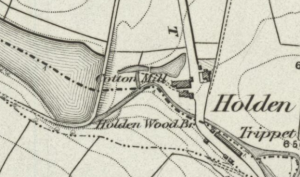 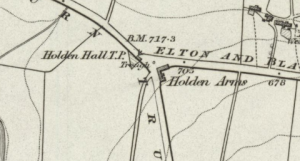 During a relatively short inquest, the first witness called was that of Nancy Whittaker, wife of Lawrence Whittaker and who resided at Stubbins-lane, Ramsbottom.

She would confirm that the body was that of her daughter, Maria Whittaker, who was 18 years of age and had left her home at around five-past six on the Thursday morning of the 15th of November. This was the last time she would see her alive, despite a diligent search by the police.

The Bury Times on Saturday, 15th December 1866 also ran a small report, stating that her father, Lawrence, would ‘handsomely reward’ anyone who knew the whereabouts of his daughter. Standing at roughly 5ft 2in, Maria had a light complextion and with sandy coloured hair, blue eyes and with a cut to her forehead.

Interestingly, Nancy would tell at the inquest that her daughter had been keeping company with a man called Robert Dawes who had lived in Helmshore, and in recent weeks she had seemingly been in low spirits.

It also emerged that Maria had also been in a downbeat mood due to being repremanded at work for her inattention to work and because of this she could not earn as much money as the other weavers.

William Randall Heys was then asked to give his evidence, telling the jury that he was a partner and the manager of Stubbins-lane mill, at which Maria Whittaker was a weaver. He spoke of having to often tell Maria to mind her work, and not to be so careless. Having known both of her parents as well as many of her friends, he always spoke to Maria in a friendly, but firm manner. He would also tell at the inquest that Maria would only earn 8s. per week, compared to those doing similar work in the same room, who earned 13s. per week.

Mary Whittaker (not a relative), who lived in Waterfoot, near Haslingden, would give details as to what had happened on the afternoon when Maria Whittaker’s body had been recovered. She explained that it was her who had laid the body out and carefully examined it. She found no marks worth mentioning upon the body, except for the back of the head, which appeared to have been eaten a little by fish or vermin. The hands were badly discoloured and a little decomposed.

The Deputy-coroner, at this part of the inquest, said it would be advisable to have a post mortem examination on the body, to which to the jury coincided and the inquest was accordingly adjourned.

On Saturday 29th December, the adjoured inquest on the body of Maria Whittaker was held at the house of Miss Pickup – the Commercial Inn, Haslingden, in which Mr. H. U Hargreaves, coroner, would listen to the proceedings.

Richard Fearfull, a carter, was one of the first to give evidence, and he would tell the jury that he resided in Holden Wood, next door to the Holden Arms Hotel. He had seen Maria on the morning of the 15th November at around eight o’clock. She was coming up the road from Helmshore towards the Lane Ends toll bar. Upon reaching the toll bar, she examined the roads leading to Haslingden and to Haslingden Grane. However, she turned back and made her way towards ‘occupation road’ which seperates the reservoir from the lodge at James Maxwell’s Holden Wood mill.

Richard would then detail how he had seen Maria heading towards a valve house due to the heavy rain that had began to fall but never thought too much of this.

Daniel Barnes, manager of Holden Wood Mills, would tell the jury that he had seen the body in the water on the Saturday afternoon of the 22nd December, explaining that he had passed the area, as had many other people, since the 15th November, and hadn’t seen anything untowards.

Barnes then detailed the operations of the lodge, saying it was at least nine feet deep and that on Saturday afternoons, all work within the mill was stopped at 1.20pm to allow water to be drained by around 18 inches. This also allowed mill hands time to clean their hands up until around 2 p.m.

He would also say that he didn’t believe the stream was strong enough to carry a human body over the gauge and into the lodge and it couldn’t have passed through the pipes into the lodge as there was a grate in front of the pipes to keep back all the filth and dirt from passing through. 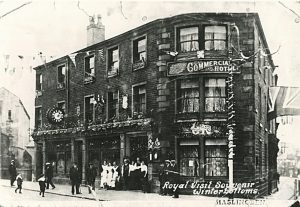 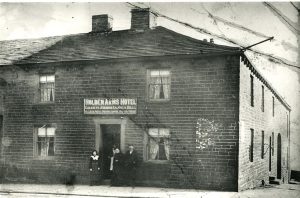 Robert Dawes, the man apparently known to have been keeping company with Maria was next to give evidence. However, he would tell the jury that whilst he knew Maria, he had never courted her but she had courted him. But contradictory to this, he also told the jury that he had ‘been’ with her only twice.

He would admit that the last time he had seen Maria was on the 5th November, to tell her he did not want her. He had met her at around 7 p.m. up and spent until around midnight with her, before eventually telling her she didnt ‘suit his fancy.’

The coroner ask Dawes : “You don’t appear to care for the girl, ” to which Dawes replied; “I care now’t about her.”

Nancy Whittaker was the asked to give further evidence, and she would tell the jury that Dawes had been with her daughter many times. Dawes replied, saying that he did not seek her company, but that she looked for his and by being in another person’s house along with Maria, he was not courting her.

The coroner then asked; “Has there been any intimacy whatever between you?”

Dawes replied that he did not understand the question, despite replying with, “deceased was not in the family way by me, as I have never had anything to do with her.”

Mr. John Binns, surgeon from Haslingden, when questioned over the results of the post mortem, gave his statement.

“I have examined the body of deceased, and find it an advanced state of decompostion. Found no bruises on the body, from the shoulders downwards. I found six or seven triangular wounds on the top of the head. This I attribute to rats ; could bot be the bites of fish. Did not believe the deceased had received any bruises whatever, or that she had received any violence from any one prior to her death.”

The jury, after a short adjournment, returned back into court with a verdict of ‘found drowned’, as there was not sufficient evidence to show how the ‘deceased’ got into the water.

Maria’s body was interred within the grounds of St. James churchyard in Haslingden on Tuesday, 25th December 1866, just three days after being recovered from James Maxwell’s lodge.

Sources used in this story;

+ many more courtesy of the British Newspaper Archive – www.britishnewspaperarchive.co.uk and www.ancestry.co.uk

Beyond the Lows – The Whole Other – No Copyright Music

Another Day – Myuu – No Copyright Music